Camper Bianca Brewer is out from Belgium to become a snowboard instructor with Pro Ride. Read about her 3rd week at Pro Ride Snowboard Camps. 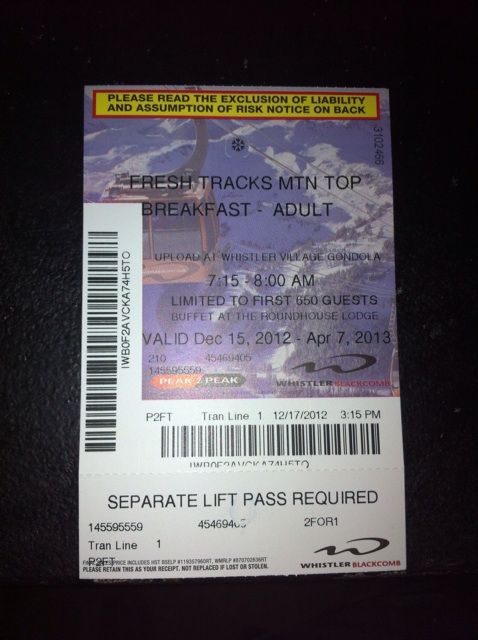 My third week here in Whistler was amazing! We had so much snow, it was unbelievable! The first two weeks it took me a while to get used to the type of snow here in Canada, it's way more powdery than anywhere I've been to in Europe before. In Europe everything tends to be really neatly groomed, or at least that's what I remember from most of the places I've been to in recent years in Spain, France and Austria. So it took me a while to get used to riding in powder, because you actually really have to adjust your riding quite a bit to be able to deal with it. This week Whistler got crazy amounts of snow and I've really started to love it! When I was younger and used to go skiing with my family I would always love going out on the sunny days, but would tend to stay in when it snowed heavily. Something about Whistler has reversed this for me, nowadays I can't wait for it to snow. The more, the better :-)!

This week with Pro Ride we started practicing our Level 1 teaching stuff. Duncan, our head coach, ran through all the different steps of a beginner lesson with us the previous week, teaching a beginner snowboarder all the way through from equipment familiarity to novice turns. This week we were all taking it in turns to practice the different steps of beginner progression according to the QuickRide System, which is used by the Canadian Association of Snowboard Instructors (CASI). Duncan makes it all look so easy, but it was actually harder than I thought it would be... I always get a bit of stage fright, so it took me a few goes to get used to talking confidently in front of a group of people. It's also quite hard to explain exactly how to snowboard when you've been doing it for so long yourself, because it sort of comes naturally to you and you don't necessarily think about all the movements much anymore. But the coaches do a great job of walking us through everything we need to get ready for the Level 1 exam, so I'm sure we'll all be fine. We were also given a book at the beginning of the Pro Ride course that has all the theory in it, I really need to start reading it! I don't know what's happened to me... I used to be such a nerd! Whenever I was told to read or study something I would get straight to it and keep on track of everything, but now I somehow seem to have gotten really lazy when it comes to stuff like that. I think my brain switched off after graduating from university in September, my body decided to take a proper gap year before starting my Masters next year. Haha!

On Monday Duncan and Karen took us to the Valley of Death. The name scared me a bit, but it was really cool! It's a secret little spot somewhere on Blackcomb mountain, I can't even remember how we got there... It's a valley through the trees where a creek runs below the snow. This added some extra excitement, because you had to avoid falling into the creek. There were lots of small holes in the snow where you could actually see the water running underneath. It took us forever to get through there, because there was so much powder and a few of us kept getting stuck or falling over. Haha! But it was a really fun day! I love how at Pro Ride they challenge you and take you to places you would never go to alone, it's so good for your riding!

On Wednesday night we had an epic snowfall here. 50cm overnight!!! They had predicted that it would snow a lot that night, so on Wednesday evening we got a call from Karen saying we would be doing Fresh Tracks the next morning. Everyday during the winter season you can buy tickets to go and do something called Fresh Tracks. The ticket allows you to go up the mountain before all the lifts open, have a huge buffet breakfast, and then get out on the slopes for the first tracks of the day. It's so much fun! So on Thursday morning we had to wake up at 5am to get ready, we were meeting everybody at the gondola at 6am to start queueing. You're not allowed up on the lift until about 7.15am, but we needed to get there early to make sure we got in. They only allow the first 600 people up for Fresh Tracks, so we queued there for about an hour. It was totally worth it! We went up the gondola at 7.30am, had a massive buffet breakfast with eggs, bacon, sausages, pastries, waffles, pancakes, cereals, fruit, etc. You can go back and get as much as you want! Then once ski patrol has cleared the mountain they ring a bell and everybody storms out the door to find their skies and boards. It's so funny! Pro Ride really picked the best day for us to do Fresh Tracks, it was absolutely amazing! We managed to get a few runs in before the lifts opened to the public and they were epic! We were all knee deep in powder, sometimes the snow was even up to our hips, down the main runs. It was incredible! You almost feel like you're floating, such a great feeling. The Fresh Tracks day, Dec. 20th, was the best day in Whistler for me so far!

This week I also got introduced to the legendary Moguls' cookies! Moguls is this little coffee shop in Whistler village, they make the most amazing cookies. My favourite is the raspberry and chocolate chip cookie, you get them to warm it up for you and it just melts in your mouth. mmm!!! They are about the size of my head, so you actually start to feel a bit sick by the time you finish it, but it's so worth it!

Thanks Karen!Had a great time here in Whis !Special thanks to yourself and Duncan and all the other pro ride team. Everything has...