Camper Bianca Brewer is out from Belgium to become a snowboard instructor with Pro Ride. Read about her 6th week at Pro Ride Snowboard Camps. 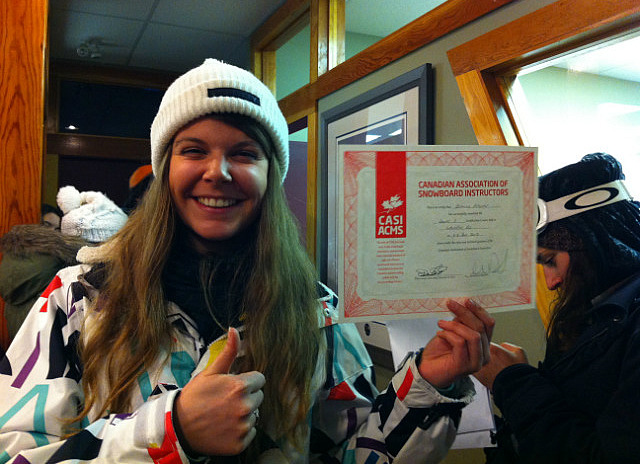 At the end of my fifth week with Pro Ride it was time to attempt my CASI Level 1 exam. CASI is the Canadian Association of Snowboard Instructors and in order to be an instructor in Canada you have to get the CASI qualifications. I am doing a total of eight weeks with Pro Ride, so I figured I would spend four weeks training for the Level 1 exam and then another four weeks training for the Level 2 exam. When I arrived in Whistler our coaches told us they would try and get us through the first exam as soon as possible so we had more time to focus on the second one, as it is much more difficult to pass. As it turned out there weren't any exams scheduled during the holiday period over Christmas and New Year, so Karen booked us all into the Level 1 exam at the beginning of January. There were seven of us from Pro Ride doing the exam, Gill, Raff, Julian, Sean, Fed, Dan and myself.

We spent a full three weeks of training with Pro Ride preparing for our Level 1 exam and I think we all felt quite comfortable with the material. We were lucky because our whole group was at similar riding levels, so I think that made things go at a relatively fast pace. Once we got through all the Level 1 stuff we already started training for the Level 2 exam, even though we hadn't done the first one yet. It was good though because the coaches wanted to keep things moving and start getting us ready for the next exam too. We had a recap of all the material the few days leading up to our exam anyway, so that was good to refresh everything we might have forgotten in the past two weeks. As I already mentioned in previous weeks, the coaches did a great job of getting us as well prepared for the Level 1 exam as possible. They made sure our riding was up to the CASI Level 1 standard and gave us time to practice our teaching skills too. The Level 1 certification means that you can teach beginners, so we were taught all the different steps to the beginner progression. Everything was covered, from skating and sideslipping all the way through to beginner and novice turns.

The exam consisted of three days, we did ours on a Friday, Saturday and Sunday (4th until 6th January). I was actually very nervous about it... I didn't think I would be, and there was actually no reason to be, because the Pro Ride coaches had done such a good job of preparing us for it. But I guess I should have known, as I always get nervous about any kind of exam.

The first day we were all introduced to our evaluators, Greg, Remo and Julian, who were actually all really nice people! It made me feel much more comfortable once I realized that they were all really down to earth people, who loved snowboarding just as much as all of us and wanted us all to do well and get our qualifications. We got split up into two groups of seven, unfortunately the Pro Riders got split up too... We didn't mind too much though, because there were still three of us together in my group, Gill, Fed and myself. We spent the morning going over the riding skills required to pass the Level 1 exam, then in the afternoon the evaluators walked us through the beginner teaching progression. All the people who had done Pro Ride with me were really happy to find out that all the things we were being taught during the exam were all the things that we had learned throughout the past few weeks with Pro Ride. After our first day we got some feedback about our riding, which made us all feel a bit less nervous about the whole thing. During the second day the evaluators walked us through the rest of the beginner progression in the morning and it was time for us to start practicing our teaching in the afternoon. Throughout the whole second day we took some breaks from teaching where we focused more the riding itself and the evaluators had the chance to start watching us and examining our riding skills. After day 2 we were all given feedback about our teaching and what we should work on for the next day. I felt much more confident after the second day, as they basically told me that if I came back the last day and did the same I would be fine. The last day of the exam was D-Day!!! = evaluation time!!! During the morning we were evaluated on our riding skills along with our teaching. We were all given one section of the beginner progression to teach to the rest of the group. All of the Pro Ride crew went first and I think everybody did really well! Then in the afternoon we all went on to teach a different part of the progression, except this time we had to teach 'children'. This part was a bit strange because we were just teaching each other, so you had to pretend to be teaching kids who are beginners when you're actually teaching almost qualified snowboard instructors. A bit awkward at times, but everybody got really involved and actually made it all go very smoothly. It's surprising how much easier things can be when you just work together.

Once our three days had passed we were asked to hang around the village on Sunday evening while the evaluators made a decision and got the certificates ready. We were asked to come back around 5pm to find out about our results. I was really nervous, although I did think we all did quite well. I guess you never know though... I was so happy to finally find out that all the Pro Ride crew had passed! We were all so excited :-)! We went to the GLC, which is one of the big après ski bars in Whistler village, to celebrate afterwards. We were planning on having a big night out because we had all spent the past week studying for our exam, but I think we were all just so exhausted from the past three days that it didn't really come to much. We still had a fun night though, and I think everybody was just extremely happy to have passed the Level 1 exam and get it all over and done with. It was definitely a very intense three days, being on the snow from 9am until 3pm everyday and on top of that feeling the pressure and nerves from being under constant evaluation. But it was totally worth it! We are now all officially qualified snowboard instructors, how awesome is that!!!

Thanks Pro Ride for the great training you gave us all for our Level 1 exam, I hope the training for our Level 2 exam lives up to the same standards and that it all pays off again in the end.

Thank you very much again Karen! Its been an amazing week and really wish i could spend more time here! Very grateful of all the...