Camper Bianca Brewer is out from Belgium to become a snowboard instructor with Pro Ride. Read about her 2nd week at Pro Ride Snowboard Camps. 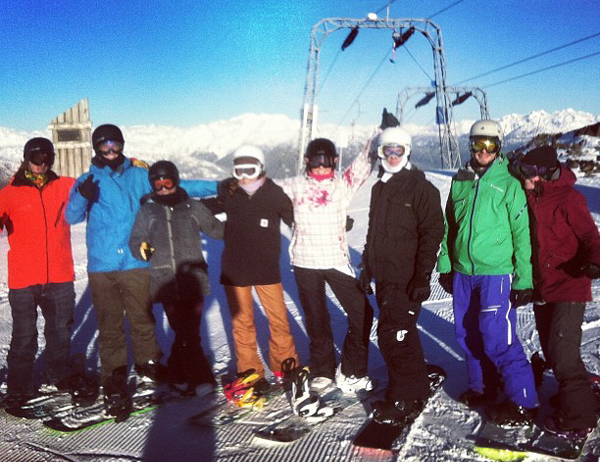 The second week with Pro Ride was at least as good as the first week, if not better! It was nice to finally have all my own gear, which made riding a lot easier for me. I struggled a bit the first week when I was trying to get used to riding with hired equipment because my shipment was delayed from Belgium with all my own stuff. I think it's mainly because I've had my own snowboard etc. for about 6 years now I think, so I've gotten really used to my own gear. But I guess it's good to have a go with something else for a change, it was definitely a challenge! During the second week of my Pro Ride Instructor course the coaches continued to work on our riding skills and kept encouraging us to try new things, which I really like. I'm a real chicken when it comes to scary or dangerous things, so I need that little push from somebody to get me to push my limits. We also started running through all the things we need to be able to teach during the CASI Level 1 exam this week. Everyday Duncan, our head coach, walked us through different steps of the beginner teaching sequence so we could start taking it all in. He showed us how we should teach beginner snowboarders to get familiar with their boards, skating, straight running, side slipping, pendulum, chicken turns, beginner turns etc.

Cody, the guy visiting downstairs from Melbourne for the week, had never snowboarded before, let alone seen snow... When I told him I was doing an instructor course he asked me if I would teach him, so I spent 3 afternoons with him after I finished my training sessions in the mornings that week. It was great experience for me too, to get to teach somebody for the first time. He did really well, by the end of the week he was turning down the mountain quite smoothly. Mission accomplished!

On Wednesday we went trampolining, it was really fun! We went to a gymnasium in Function Junction, about 10 minutes down the road from Whistler village. There were six of us doing it and one girl teaching us the basics of trampolining. It was really nice to have somebody show us how to do it properly, instead of just going there and jumping around on a bunch of trampolines... She got us to do all sorts of different little exercises, which eventually got us doing front flips. Everybody wanted to try a back flip too, but she said we weren't quite ready for that yet. I hope we get to go back again some time, then she can teach us that.

Fridays with Pro Ride have been named Fun Fridays! On Fridays the coaches tend to give the teaching stuff a break and take us for a little adventure. This Friday we went up to the Blackcomb Glacier, because it had just opened the previous weekend. To get up to the glacier you have to take a T-bar, which I haven't done for years. In Europe they are really common, there are usually just as many T-bars as chairlifts in the European resorts I've been to. But the past few years I haven't been skiing in Europe much, so I'm not used to those anymore. In the US and Canada they hardly ever have them, the majority of lifts are chairlifts. One of our coaches told me that apparently all glaciers have T-bars because they are pure ice underneath, which makes it impossible to drill down the structures required for chairlifts. The ice is also constantly moving underneath, so they need to keep moving the T-bars. Once we got to the top on the lift we hiked up for another 20 minutes or so to get to the top of the mountain. I have never felt less fit in my life... Haha! The hike up was crazy, we were all so out of breath when we got up there. It's one thing hiking up a hill in normal clothing, but try it in the snow with boots on and it's a whole other story. Once we got to the top it was totally worth it though! I've never seen anything so beautiful! We were really lucky with the weather too, it was a really clear blue sunny day. Perfect! It was so funny, when we got up there there was a beer waiting in the snow for us. Apparently people always take beers up there and then the odd one gets left for whoever makes it up there next. We shared the one icy beer between about eight of us, haha! Sharing is caring :-)! The ride down from the top of the glacier was incredible! It was all fresh powder with hardly any tracks through it at all.

On Sunday night the resort was hosting the first Fire and Ice show of the season, so we all went to watch that in Whistler village. The Fire and Ice show is put on every Sunday evening for the rest of the winter season. They build a massive jump at the bottom of the Olympic run between the Blackcomb and Whistler gondolas with a big ring of fire to jump through. Every week three snowboarders and three skiers working for the mountain do crazy tricks off this jump through the ring of fire, it's really cool!

Dear Karen & Pro Ride Team, On behalf of Emma, Joel and I, we would like to thank you for what was an incredible week in...