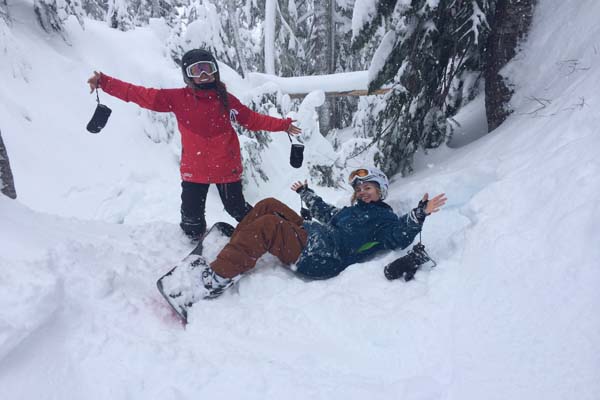 Wednesday 19th Feb was scheduled for the Pro Ride Mt. Baker Trip! All campers doing 8 weeks or more were eligible to come. There were 10 of us going, Duncan and Alan (the two Pro Ride Coaches), Lisa, Jose, Caren, Dan, Adriaan, Joel, Scott and myself. Mt. Baker is in the USA and about a four-hour drive from Whistler. It was not easy getting out of bed at 2:50am that morning, but I managed to be downstairs in the car at 4:00am ready to leave. Karen hired 2 cars for us. I was in the car Duncan was driving with Lisa, Jose and Caren. We stopped at Tim Horton’s in Squamish at 5:00am for breakfast, then it was back on the road again. It was reasonably smooth sailing across the US border. We had to go inside and hang around for a while but luckily everyone’s paperwork checked out and we didn’t have to leave anyone there for the day. It was only about an hour and a half to Mt. Baker from the border. It was such a beautiful drive up. All the trees were huge and covered in this awesome moss. We also passed a Christmas tree farm. I have never seen one of these before so I thought it was pretty cool!

When we finally made it up to the slopes everyone was scrambling to get their snowboard gear on. Duncan then started handing out Red Bulls so after downing that I was feeling pretty hyped and ready to go smash some fresh power. Mt. Baker had received 30cm of fresh snow overnight and we were right at the front of the lift line. Mt. Baker doesn’t have any terrain parks and all of the lifts are super slow and have no safety bars. It’s the complete opposite to Whistler. The chairs don’t slow down to let you get on to them, that took some time to get used to. At one point in the day Joel went to get on the lift and didn’t quite sit far enough back on the chair causing him to fall about 3 meters down off the lift (luckily there was fresh snow underneath) he was fine, but it was pretty funny to watch. 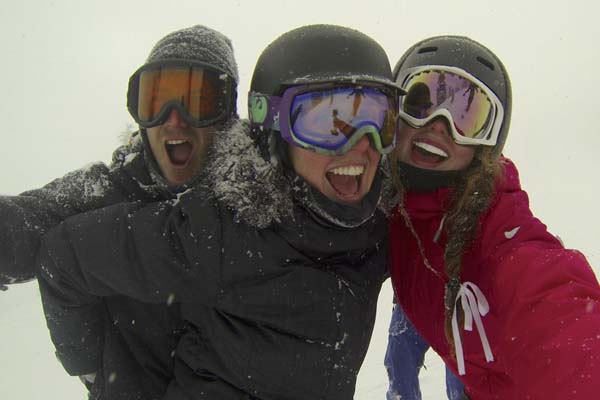 The first and second runs of the day were absolutely amazing! We all had completely untouched terrain to smash through. Everyone was so amped after that. We then went exploring into the trees a little to try and find some drops. Duncan, Alan and Joel were hitting some pretty gnarly stuff. I was quite happy just watching and checking out the landings for them. Mt. Baker is a pretty small resort with only about 6 chairs. For the rest of the morning we just went exploring trying to find things to jump off and hidden powder stashes. There were so many stacks and tomahawks from everyone in the group including Duncan and Alan. It's nice to know that even riders as good as Duncan and Alan still eat s***t sometimes too just like the rest of us, haha!!

We all went in at about 1:00pm for some well-deserved lunch. Everyone was pretty tired and definitely needed to refuel. We then all regrouped for round two of pow smashing! We found a section of the mountain that had a heap of really awesome side hits. Everyone was hitting them with a ton of speed practicing all kinds of spins and grabs. We then somehow stumbled onto a creek bed that was so full of powder, it was sick! We found a bunch more hidden powder stashes, which is pretty good considering it was about 2pm in the afternoon. On our last run of the day we went through this section of trees right on the edge of the ski boundary. It was unbearably beautifully! There were so many untouched pillows! After that we all went to the bottom, took a few group photos and then headed back to the car. After getting changed out of all our super wet snowboarding gear, we headed back down the mountains. Heading to Vancouver for dinner. 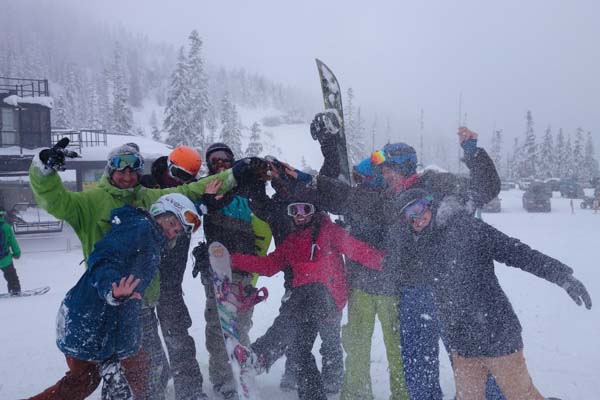 We were able to drive straight over the boarder this time, no problem. In Vancouver we went for dinner at a Japanese sushi restaurant. We then all piled back into the cars and headed for whistler. The car trip home was definitely a quite one, I think I fell asleep for maybe 20 minutes too. Then we got to Squamish to fill the cars up with petrol. We finally made it home at about 10pm. Everyone was super tired, after unloading the car everyone went to bed but not before uploading a few photos of the awesome day we just had to Facebook and Instagram. It really was one of the best days I have had riding powder.

Thank you Duncan, Alan and Karen for such an amazing day :D