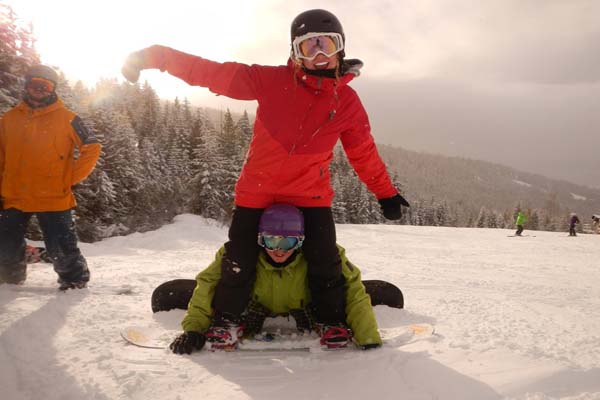 That Saturday everyone had a pretty mellow day. In the afternoon I suggested that we all go to the Sk8 Cave and Bounce. The Sk8 Cave is a skateboard shop in Function Junction that has a mini ramp inside. English Joel, Adriaan, Belgium Joel and myself all went for a session at the Sk8 Cave, everyone else went straight to Bounce, we would join them there in about half an hour.

It was super fun to be back on a skateboard! I’m far from good, I can just pump the walls and go back and forth, this is super good for improving halfpipe riding and since they STILL haven’t built the Halfpipe up on Whistler and with nationals only weeks away I’ll take all the training I can get. oth Joels are pretty good skateboarders and were doing some pretty awesome stuff! We were all about to leave when I had one last go. I came back down switch, but super back foot heavy and fell straight backwards onto my out-stretched arm. My whole arm went numb and was really tingly. I got worried at that point, after sitting there for a minute and moving my arm a bit, it seamed to be ok… or so I thought. 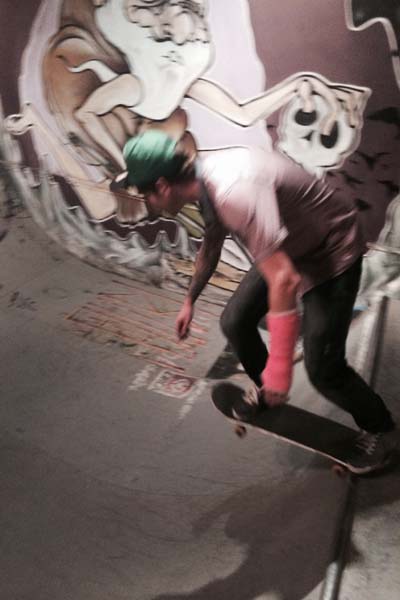 The four of us then went over to Bounce to join the others. The others had been over in the other Bounce facility where there is an Olympic grade trampoline. Ben had been bouncing on that trampoline when he landed awkwardly dislocating his left knee and tearing his ACL (this became apparent in the next few days after seeing a doctor and physiotherapist).

Scott, Joel, Joel, Beth, Caren, Adriaan and I had a pretty awesome Bounce session. The guy who owns Bounce is super friendly and super keen to teach people new things. Joel and I were trying to learn a back flip to the foam pit. So a jumping-forward back flip, it’s harder than it sounds, haha. 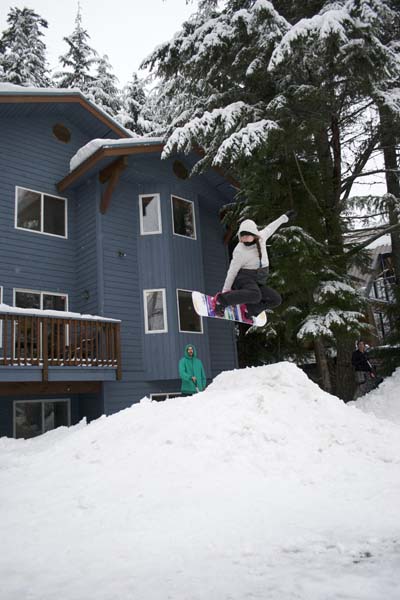 It had been snowing about 15cm every night that week in the village and we were starting to accumulate a lot of snow in the driveway. On Sunday the plow guy came around and we got him to push all the snow to either side so that we could build a drop in and a stopping ramp. After a pretty serious planning session, the whole male population of the house was outside shoveling snow, my shoulder was super sore from the fall I had the night before at the Sk8 Cave, so I appointed myself supervisor of the operation. The plan was to build a drop leading to a jump. Simple really… haha. It took about 2 hours of snow moving before it was ready to hit. fter everyone hit it a few times we all decided it needed to be bigger. After a 30-minute rebuild of the take off and jump it was ready to hit again. We stayed ouyt there for ages hitting it. It was and awesome day of snowboarding without even leaving the house. ecause it had been snowing all week absolutely everyone was up here for the weekend and the lift lines were the longest I had ever seen, there was no way any of us were going to stand around all day in lift lines.