Camper Bianca Brewer is out from Belgium to become a snowboard instructor with Pro Ride. Read about her 4th week at Pro Ride Snowboard Camps.

My fourth week in Whistler meant that it was finally Christmas time! Christmas is my favourite holiday of the year, I think the main reason is because my family always celebrated it in a really nice way. My Grandmother would fly over to Belgium from the UK and we would have a real family day together. We would wake up in the morning and have a massive brunch, open up all our present in front of the fireplace in the afternoon and then have a massive family dinner in the evening. It was always the nicest day! I was a bit worried that this year would be strange for me not being with my family for the first time, but it ended up being a very different and fun Christmas in Whistler! 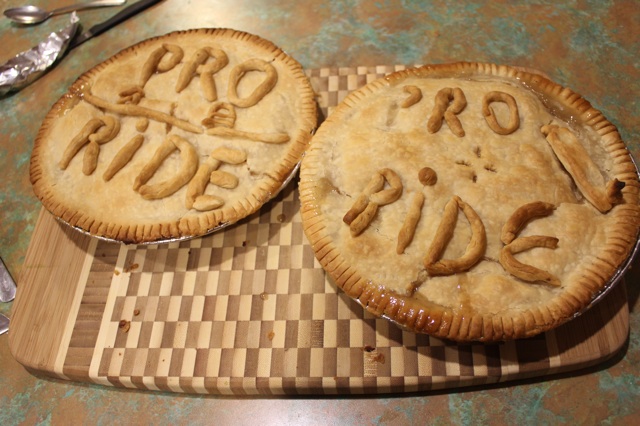 On Sunday evening we had a 'Pro Ride family dinner' with all the campers and coaches at the Brio house, it was so nice! At this point there were five of us living in the house, Jane, Julian, Fed, Dan and myself. The guys were in charge of the turkeys and the girls were in charge of the apple pies. We all went to the supermarket on Sunday morning to pick up the ingredients. Karen had already bought us two massive turkeys when she went down to Vancouver earlier that week. The guys prepared the stuffing etc. and put the turkeys in the oven in the afternoon, then Jane and I made apple pies just before everybody arrived. It was nice to have everybody involved and helping out, it reminded me of home where it's the one day a year when the whole family has to help out somehow with dinner. The house was pretty full once everybody arrived, I guess there must have been about twenty of us. I always wanted a big family :-)! Haha! The food turned out really well too, everybody stuffed their faces with turkey and pie (as you do on Christmas day)! We even had Christmas crackers! I also tried egg nog for the first time, which was interesting. It's basically whipped up egg whites made into some kind of milky drink, then they put some rum in to make it a bit more interesting. I liked it!

On Christmas Eve a few of us just had dinner and went for drinks in Whistler village. We'd had a morning session with Pro Ride and we would have another one Christmas morning, so everybody was a bit tired and didn't want to do anything crazy. It was still a nice evening though! On Christmas Day I went up the mountain for my morning session with Pro Ride, which was really awesome because the coaches wanted us to have a fun day for Christmas. I came straight back down the mountain once we finished at lunchtime so I could go home to Skype with my family. My Mum had hidden a bag full of presents in the shipment she sent me when she shipped my snowboard etc. over to Canada at the beginning of the month, it had a big note on it saying 'do not touch until 25th December' so I kind of guessed what it might be :-)! She's so sweet! So I opened up all my presents on Skype with them on Christmas Day before they went to bed, gotta love technology! I miss my family a lot, but things like Skype make it so easy to keep in touch, it's great! My brother also sent me a link to a video he had made for me for Christmas. He got all my friends and family back home in Belgium to send him a clip with a Christmas message, then he put it all together into a little movie for me. It was so sweet, this has to be the nicest Christmas present anybody has ever given me. My brother is the best! In the evening I went with a friend from Pro Ride, Sean, to his cousins' place for dinner, which was really nice. They cooked turkey etc. and we had another really nice Christmas dinner. Lucky me, so many turkey dinners this year! Thanks for inviting me along Sean!

So all in all, even being away from my family for Christmas wasn't the worst thing. I had a really nice time spending it here in Whistler for a change in this great place with some new friends!

If it weren't for the expert level of tuition and constant feedback on my progress at the 12 week camp I attended, then there...